The elephant sightings began as soon as my charter flight touched down on the dirt airstrip in Kenya‘s Maasai Mara National Reserve. My guide and I hopped into a safari Jeep and followed them, big lumbering gray masses that looked at once extremely friendly and incredibly dangerous. This wasn’t an elephant in a zoo; I was on their territory now, surrounded by tall grasses waving in the light breeze and the midday sun. A baby elephant — no more than three months old, my guide told me — trotted alongside its family, stopping to look at us for a moment before running to catch up.

The future of that particular baby elephant is tenuous. Life as a child in the Kenyan wilderness comes with a lot of risks. The elephant could end up orphaned because a lion killed its mother, the mother elephant died from natural causes, or even from something as simple as the baby wandering off and getting left behind accidentally. But there is a surprising way that humans are helping elephants survive – all while indulging the comforts of a luxury safari.

That’s where luxury safari lodging &Beyond Bateleur Camp and its carefully curated gin bar come in. The camp sits in a private corner of the Mara at the tail end of the wildebeest migration trail. It has 20 high-end tents with copper bathtubs, plush beds, and entire walls of screen so you can commune with nature at night while keeping the bugs out.

And in the center of the camp is the gin bar, which is in a tent of its own with pendant lighting and cozy sofa seating. The bar stocks 16 different gins and specializes in gin and tonics made with organic herbs and ingredients grown in the camp’s on-site shamba, an organic vegetable garden. But one variety of gin is especially important: The Elephant Gin. For every bottle of elephant gin sold at Bateleur Camp, 15 percent of the profits go to help orphaned elephants at The David Sheldrick Wildlife Trust in Kenya and the Big Life Foundation in East Africa. 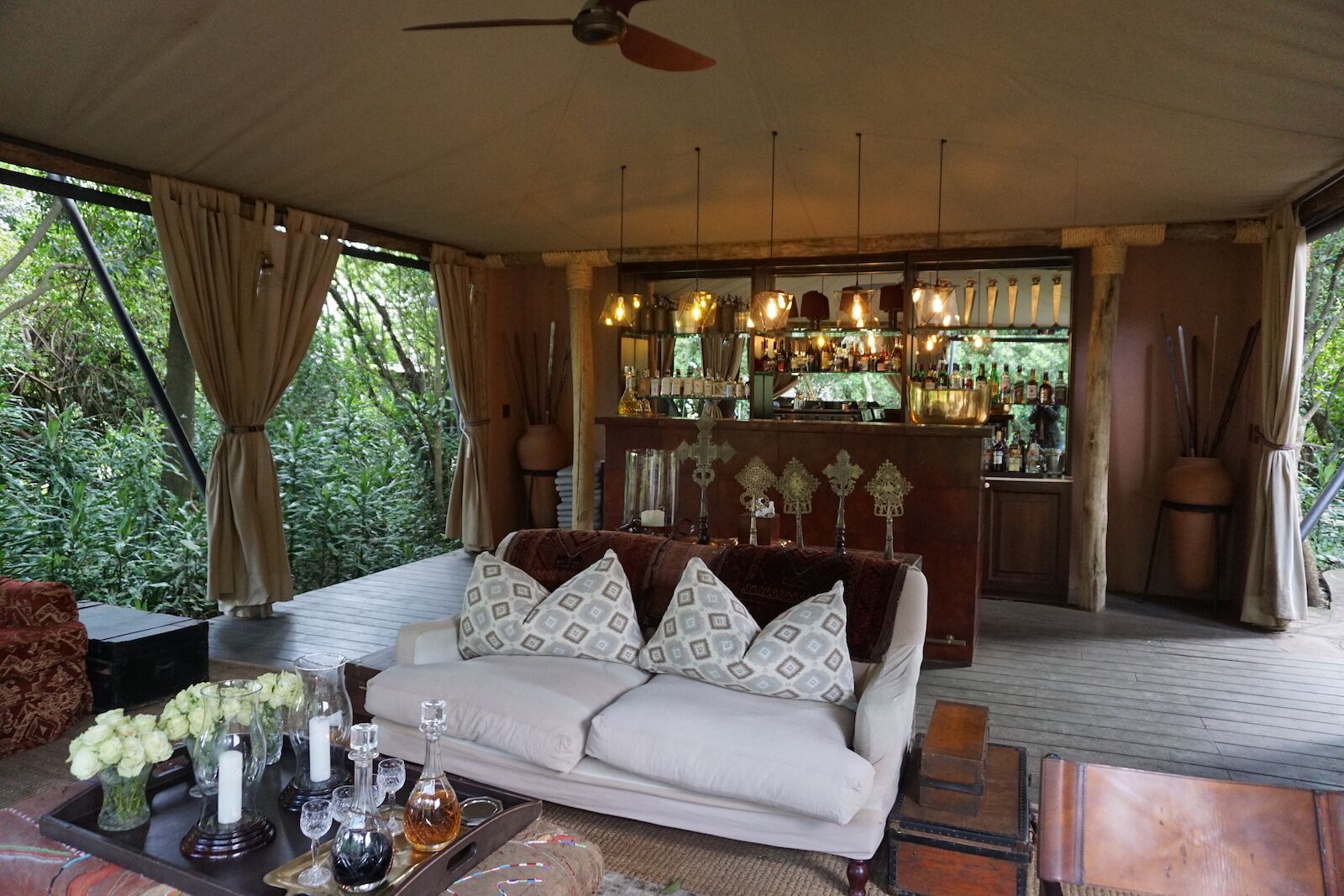 “We specialize in gin because it’s very medicinal,” says Esther Baridi, one of the camp managers. “In Africa we have a history of malaria. When you drink gin, it’s like you’ve taken a shot of medicine. The gins all have herbs that have healing effects in the body. When you have a gin and tonic, you’re already healed. You’re helping your body and helping yourself.” 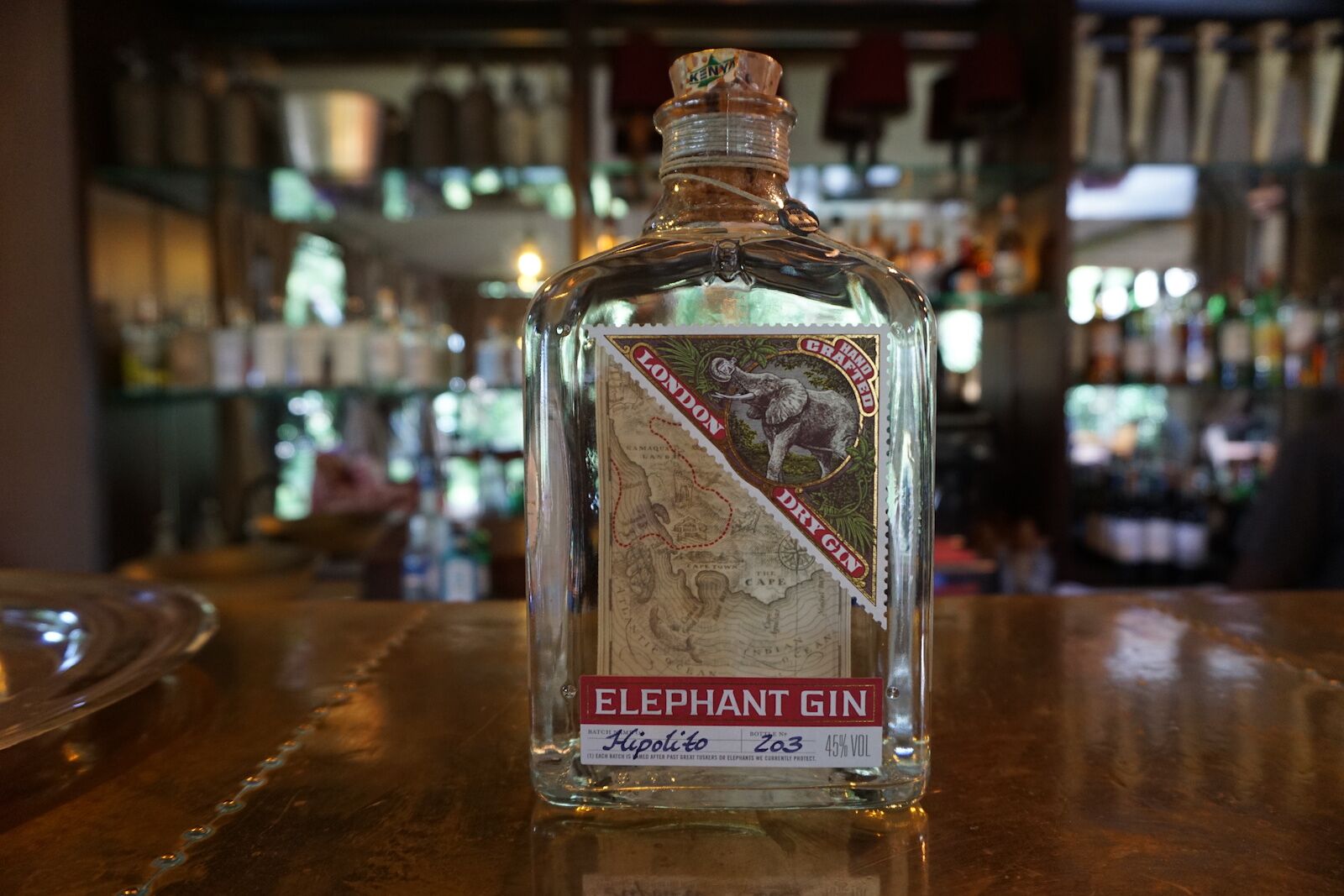 Elephant Gin is a London dry gin made with 14 organic botanicals, including cassia bark, juniper, elderflower, and pimento berries. It smells and tastes citrusy, with a hint of lemon on the tail end of a sip. The program currently supports 22 orphaned elephants, each of which have a batch of the gin named after them and their name hand-written in calligraphy on the bottles. The donations are used to provide milk and care for each orphaned elephant. When the elephants are old enough to survive on their own, they’re released back into the wild

“The program keeps the elephants growing for the next generation,” Baridi says. “We’re looking after our animals so they don’t go extinct.”

Employees at Bateleur Camp see firsthand the benefits of the program. Baridi told me of a baby elephant that was orphaned near the airstrip. The Sheldrick Wildlife Trust came and airlifted the elephant out of the Mara, removing all the seats inside a plane so it could sit inside for the flight. Baridi watched the evacuation.

“It was only about a month or two old,” she says. “It was a very powerful moment.”

The orphaned elephant was taken to Nairobi, where the Sheldrick is based. There, it was raised and fed by hand — along with help from a line of visitors who can sign up in advance to bottle-feed the elephants. Sometimes guests at Bateleur Camp return from the Sheldrick with news of how the rescued elephants are doing. And sometimes the camp sees it personally, like when they witnessed the reunion of an elephant who had been raised at the Sheldrick with its caretaker. The elephant saw him, recognized him, and immediately ran over to say hello.

Raising the elephants takes a lot of work, but it’s at the core of &Beyond’s mission as a company, to support not just local people and the environment, but also the animals living nearby.

“When we sell Elephant Gin, it means every guest that drinks is contributing,” Baridi says.

I had to do my part, of course, so I enjoyed a gin and tonic made with Elephant Gin from the Hipolito batch and fresh mint and sliced apple from the garden. I’d been struggling that day, coughing from dust on the roads we were driving on as we followed the elephants, lions, and giraffes through the Mara. It was heartwarming to contribute to the elephant cause. The gin and tonic helped me back — as soon as I finished it, my cough was gone.

Best of swahili dishes you should try

A Beginner’s Guide to Emirati Cuisine

A Complete Guide to Qatari Cuisine

A Beginner’s Guide to Emirati Cuisine

How to Transition Your Food Business to Delivery or Ecommerce

What’s Next for Shared Kitchens? Getting Ready for the New Normal

Getting shared kitchen ready: 8 questions you need to answer

5 Factors to Consider When Assessing your Local Market Conditions

Why Kitchen Culture is the Most Crucial Shared Kitchen Ingredient

6 Factors to Consider When Renting Out Your Church Kitchen

No comments to show.

Hello Food offers some of the most sumptuous deliveries in Eldama Ravine and byond. We also train on some of the basic pastry methods.